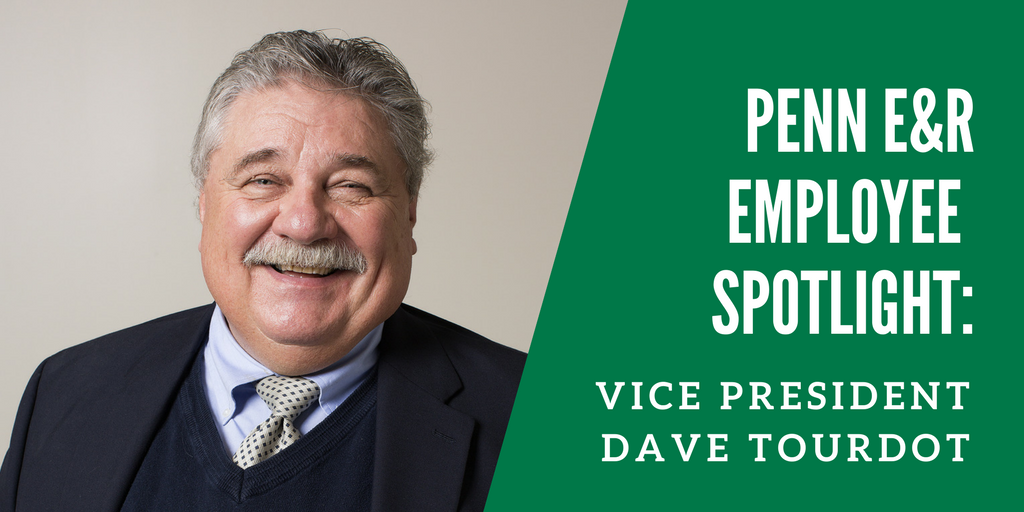 Marcel David Tourdot (Dave) joined the Penn E&R team in February of 2004, after previously serving as President at Earth Sciences Consultants.  In his current role as Penn E&R Vice President and Manager of the company’s Western Regional office in Pittsburgh, Pennsylvania, Dave has successfully overseen numerous large-scale remediation projects, including the cleanup of a  low level radioactive materials site decommissioned under the guidance of the Nuclear Regulatory Commission (NRC) and a unique project that involved accessing and pumping water out of a 3600’ long tunnel that lay beneath a manufacturing facility to remove asbestos containing materials (ACM) from abandoned steam lines.  He is especially proud of his long-standing relationship with a client in the coal sector which has been particularly fruitful for both sides.

Get to know a little more about Dave below:

1. What is your role at Penn E&R?
I serve as the current Vice President and Regional Manager for the Western (Pittsburgh) Office of Penn E&R.

2. What does a typical day at Penn E&R look like for you?
There is no typical day. For example, we have established a staff schedule for the Pittsburgh office that we try to maintain for everyone. For me, each day is different and I usually don’t know what will be required of me until I pick up the phone from my night stand. The clients or potential clients or vendors or employees usually dictate what my day will be. Rarely does my line on that staff schedule stay the same for the entire week. Juggling those changes is what is typical.

3. Where are you from?
Centerville, Washington County, Pennsylvania

4. What college did you attend?
Indiana University of Pennsylvania

5. What is one goal you’d like to accomplish in your lifetime?
I have traveled extensively in my working career but never by train. My bucket list wish is to ride a train with restaurant and sleeping facilities. Possibly to Alaska or the Polar Bear express to the Hudson Bay.

6. What is your proudest achievement?
My wife, children and grandchildren.

7. What hobbies do you enjoy when you’re not at work?
Hunting and fishing, but mostly fixing things around the house.

8. What is something people would be surprised to learn about you?
I love to dance. I love poetry.

9. What is (or are) your favorite sports team(s)?
The Pittsburgh Steelers, Penguins and Pirates.

10. Who is your hero?
That’s easy – my dad. What he sacrificed for his family taught me lessons that became building blocks for my life.

11. What is your favorite part about working at Penn E&R?
An easy answer is “ringing the bell” to acknowledge a new contract award. I do so love competing against my competitors and winning the award.

But if I had to be honest, I’d have to say it is being a part of the Penn E&R team. I’ve said it before and I’ll say it again, I have worked for five companies during my 43 year working career – from Fortune 100 companies to the largest construction company in the world – and this is the best company I have ever worked for, because of the people who form this team. They care.